Hyundai look to branch out beyond the Tucson compact and Hyundai Santa Fe when it comes to crossovers so they have introduced a new concept called the Santa Cruz at the Detroit Motor Show. 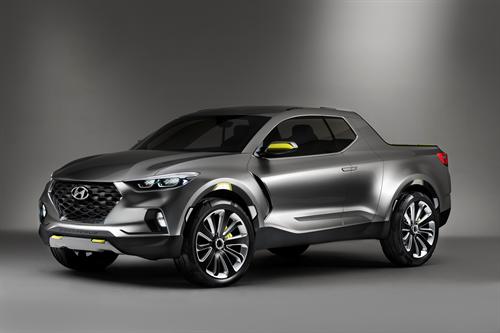 The Santa Cruz is a 4 door 5 seat crossover which has a a extendable truck bed at the back, essentially it looks like a small pick up truck. Its target audience is urban adventurers, who would appreciate the kind of cargo space you get with a pick up truck but are put off by the price and size of a traditional pick-up. According to Mike O’brien VP of corporate and product planning at Hyundai Motor America,“For a large group of people, a traditional pickup simply doesn’t work.”

The Santa Cruz concept will house a 2.0-litre diesel engine that produces 190hp  but obviously the thing that has everyone talking is the extendable cargo bed which Hyundai claim is as big as the bed you would find on a pickup like the Toyota Tacoma.